The following is exact wording printed on interpretive panel #10 on the self-guided walking tour of the Florida Chautauqua Resort/Campus grounds opened in 1885 in DeFuniak Springs, Florida. This panel displays the history of the Tabernacle on the grounds.

A 2,500-seat auditorium called a tabernacle stood on this site from the opening year of the Florida Chautauqua resort/campus until 1909 when it was eventually replaced with a new, 4,000-seat auditorium known today as the Chautauqua Hall of Brotherhood. The tabernacle contained the first grand auditorium of the resort used for major lectures, performances and special functions during the Florida Chautauqua season which lasted up to nine weeks, beginning in February.

During the Chautauqua season, event organizers often decorate the stage for evening performances to complement each day’s learning activities. Such notable speakers like American Orator and Democratic Party Presidential Nominee William Jennings Bryan, and American Red Cross Founder Clara Barton would lecture from this stage. [Although an 1895 printed program announces that Gov. William McKinley of Ohio (who later became president of the United States) accepted an invitation to make a presentation, no records have been found indicating he attended the Assembly that year.] The Caricco Orchestra, most notable for their performances at many world fairs, were invited by Chautauqua leaders to perform during the annual Assembly.

During the “off-season,” leaders hosted and orchestrated other types of meetings and events at the Tabernacle, including the creation of the Southern Forestry Congress in partnership with the American Forestry Congress in December 1885. This event led to the declaration of Arbor Day in Florida by Florida Governor Edward Aylsworth Perry who was in the audience and inspired by an presentation by National Arbor Day Movement Spokesperson B.G. Northrop. The founder of Arbor Day, J. Sterling Morton, later attended the Florida Chautauqua Assembly in 1887 as a major speaker on this site. Chautauqua leaders replaced the 2500-seat Tabernacle in 1909 with the 4,000-seat Chautauqua Hall of Brotherhood to accommodate the rapidly growing crowds to the annual Assembly. 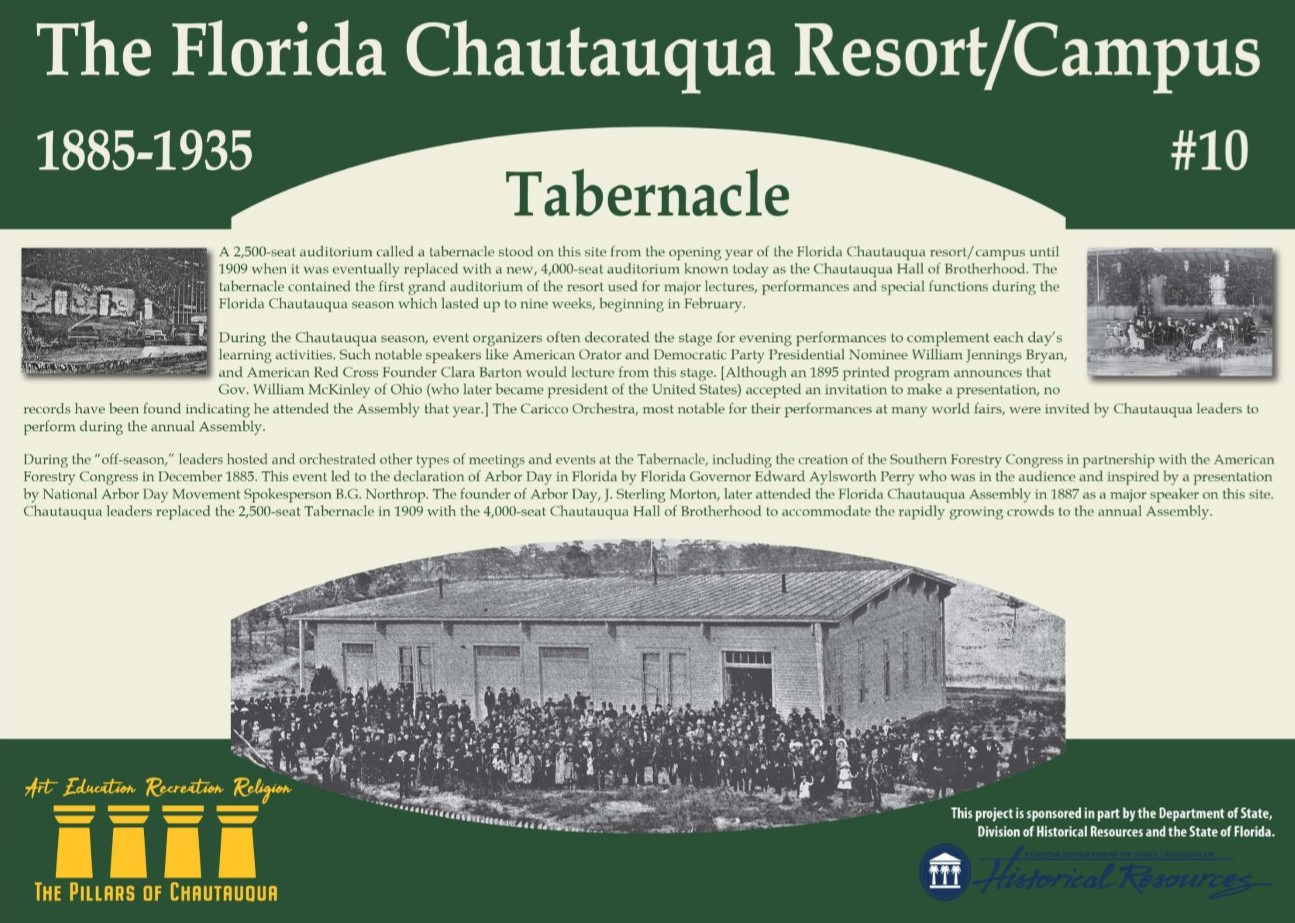