The following is the exact wording printed on interpretive panel #15 on the self-guided walking tour of the Florida Chautauqua Resort/Campus grounds opened in 1885 in DeFuniak Springs, Florida. This panel displays the history of Pansy Cottage, once owned by Isabella MacDonald Alden also known by her penname "Pansy."

People of all economic backgrounds enjoyed the Florida Chautauqua Assembly with a small daily entry fee or week-long hotel stay. More affluent members built homes on these once-gated resort/campus grounds, allowing them proximity to the activities of the Winter Assembly. Author Isabella MacDonald Alden, with the penname Pansy, was among these.

Alden wrote more than 100 Christian books during her lifetime. She worked with her husband, Rev. G.R. Alden, editing a children’s magazine – The Pansy. Several of her books, such as Ester Ried, were based on personal experiences; others, like Chautauqua Girls series, were inspired by her interest in the Chautauqua movement. Her books were enormously popular during the late 19th century. In 1900, sales were estimated at around 100,000 copies annually. Some titles were translated into several languages including French, German, Russian, and Japanese. (Alden was also the aunt of author Grace Livingston Hill.) Alden was intimately involved in the Chautauqua movement. She was a graduate of the Chautauqua Literary and Scientific Circle, Class of 1887, which was appropriately named the Pansy Class. Alden was an instructor of primary teaching skills during the first years of the Florida Chautauqua.

Alden leased (and later purchased) this lot in her own name in 1885, unusual for a married woman at that time. The May 1885 Chautauquan refers to Pansy building as one of the pretty cottages around Lake DeFuniak. Due to her son’s ill health, the family made Winter Park, Florida their permanent home in 1886, building another house there also known as Pansy Cottage. The latter house was torn down in 1955, so Pansy Cottage in DeFuniak Springs is now the only Pansy Cottage. 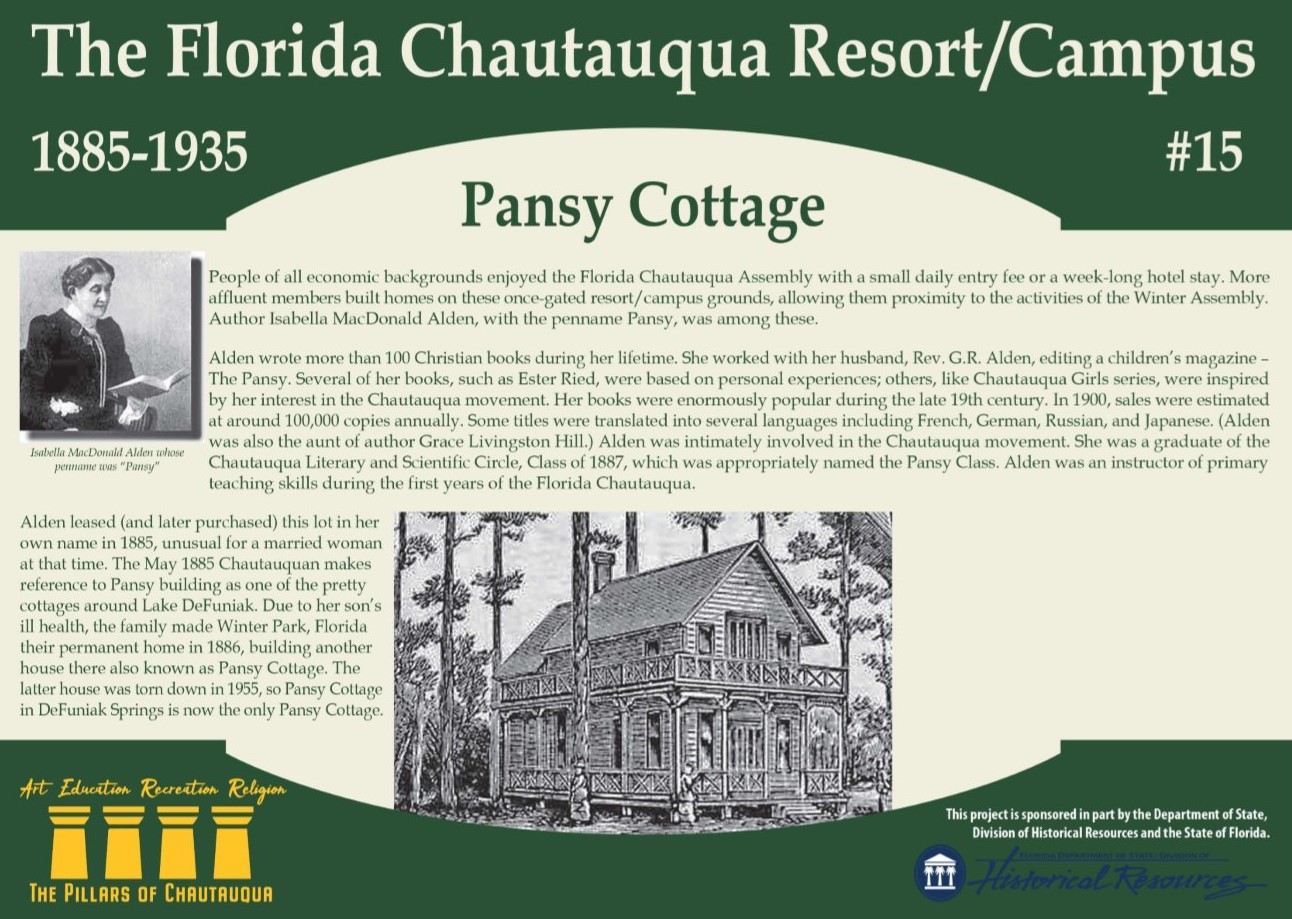